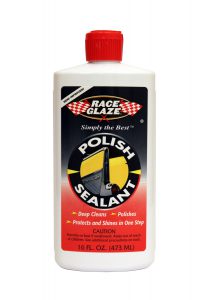 In the spring of 1977, the manager of an Oldsmobile dealership in Southern Wisconsin was given a sample of polish being used by NASA to treat rocket tiles and fuel cells to reduce friction and drag. The formula was developed exclusively for NASA and not available for sale to the public.

After inspecting a car which was treated with the formula, the manager was convinced that it provided superior results to anything on the market. The treated car finish exhibited a deep gloss, was very durable and was unaffected by multiple car washes. The formula was outstanding in all areas however, took a lot and time and effort to buff-out the vehicle. He knew the formula could sell virtually anywhere it was demonstrated if it could be made easier to use.

The manager was introduced to Ron Whitt, the owner of ChemRite Industries in Lannon, Wisconsin. After testing the formula on several vehicles, Ron too took an immediate interest in the re-development of this concept.

Research and development continued over a 14 month period until a stable and high-functioning formula had been created. Ron had been able to match all of the strong qualities on the NASA formula and in the process, able to eliminate the weak elements.

The result was a sophisticated, yet simple-to-use polish and sealant which could be utilized in the auto, aircraft and marine industries. It was unlike any car “wax” that had ever been formulated and used before. Both the Oldsmobile manager and Ron noticed how “slippery” the product was and felt promoting this new product in auto racing, where low drag was important, may be a good start.

Based on those beginnings, Race Glaze Polish & Sealant was born. Polish and Sealant was just the beginning of the Race Glaze system, which soon added products for washing vehicles, quick detailing and renewing auto trim and leather.

Even from the humble early stages of Race Glaze, the products have always been known as and continue to be developed and produced as “Simply the Best”.

A variety of online retailers and local stores carry Race Glaze products. Click here to find a retailer or buy online from a trusted retailer.

Learn about the history of Race Glaze and why it has become the preferred choice of thousands over the past 30 years.